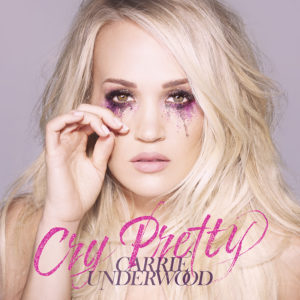 Nashville, TN – Multi-platinum-selling global superstar Carrie Underwood released the track listing and songwriters for her upcoming studio album, Cry Pretty, available on September 14.  Her first time officially in the Producer chair, Underwood co-produced Cry Pretty alongside David Garcia and she co-wrote nine of the songs featured on the album making it one of her most personal albums to date.

“She brings dignity and drama to being broken. And in her power-vocal relentlessness, Underwood shatters conventional wisdom with a potent few words and a squealing guitar.” – Hits

“…a classic country song with soul at its cathartic heart” – NPR

In Spring 2019, Underwood will launch a new arena tour, The Cry Pretty Tour 360. Sponsored by CALIA, the new tour will kick off on May 1 in Greensboro, NC, and will play 55 arenas across the U.S. and Canada and be promoted by AEG Presents.  She will be joined on tour by special guests Maddie & Tae and Runaway June.