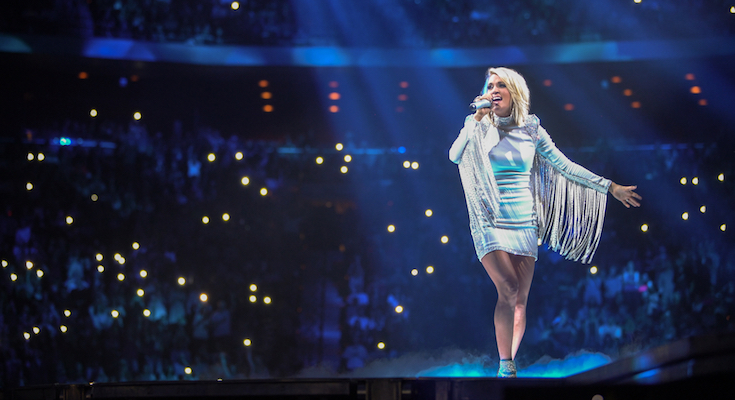 NASHVILLE, Tenn – (August 30, 2016) – Seven-time Grammy winner and Pollstar’s three-time top female country touring artist, Carrie Underwood, will launch the fall leg of “The Storyteller Tour – Stories in the Round,” the biggest tour of her career, tomorrow night in Anchorage, Alaska. Billboard ranked the tour the #1 country tour for the first half of 2016.

The fall tour dates of “The Storyteller Tour – Stories in the Round” begins with Carrie’s inaugural performance in Alaska tomorrow night, and will include stops at STAPLES Center in Los Angeles, CA, Bridgestone Arena in Nashville, TN and Madison Square Garden in New York, NY. When the tour wraps at the end of November she will have played 82 arenas on tour.  In December Carrie will join Keith Urban on the Australian and New Zealand leg of his “ripCORD World Tour 2016.”

During the first half of 2016 “The Storyteller Tour” rolled in to 47 cities as well as seven different countries, playing to nearly 600,000 people since the tour launched January 30 in Jacksonville, FL. The dramatic in-the-round stage production has been seen by 360-degree sell-out arena crowds across North America in cities such as Pittsburgh, Philadelphia, Boston, Washington DC, St. Louis, Denver, Phoenix, San Antonio, Houston, Chicago, Toronto to name just a few. The tour crossed from one coast to the other coast and cities in between as well as traveling overseas to play in Sweden, Norway, Scotland, England, and Ireland as part of Country to Country (C2C), Europe’s biggest country music festival.

“The Storyteller Tour – Stories in the Round,” one of her most spectacular concert tours to date, has caught the attention of fans and music critics alike because of the stand-out performances and the dynamic production.

The show “is a no-expense-spared spectacle that highlights her approachable beauty, her roar of a voice and a substantive set of songs that have commanded the charts since her ‘American Idol’ victory a long decade ago.”
Atlanta Journal Constitution.

“The most stunning part of the production however, remains Underwood’s voice, strong and nuanced.”
The Boston Globe

The 2016 tour is in support of Carrie’s Gold-certified Storyteller album, which made a historic debut in October 2015 when she became the only artist in the chart’s 51-year history to have each of her first six albums to enter the chart at #1. The album has produced three #1 singles so far with “Smoke Break,” “Heartbeat” and “Church Bells” with it’s fourth single, “Dirty Laundry,” currently climbing the charts.

The North American tour, with the exception of Anchorage, is promoted by AEG Live and includes special guests Easton Corbin and The Swon Brothers. Tickets are available now for the fall dates of The Storyteller Tour at www.aeglive.com. For information on fan club and VIP packages go to www.carrieunderwood.fm.