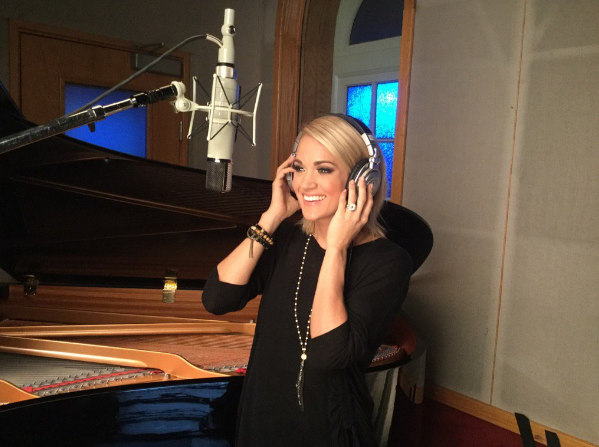 “I love being part of the Sunday Night Football family and can’t wait for the fans to hear the new theme song,” said Underwood, who is in her fourth season performing the SNF open for NBC.

“We’re excited to kick off our second decade of Sunday Night Football on NBC with a new opening theme,” said Fred Gaudelli, Executive Producer of NBC’s Sunday Night Football andThursday Night Football. “Earlier this offseason, Carrie said she had a special idea for a newSNF open song. When we got into the recording studio in Nashville, the song instantly came to life, and will be a dynamic addition to our show.”

“Oh, Sunday Night” is set to the music of “Somethin’ Bad,” a chart-topping duet from Underwood and Miranda Lambert which was released in 2014 and earned a Grammy nomination for Best Country Duo/Group Performance. Underwood worked with the songwriters of “Somethin’ Bad”– Chris DeStefano, Brett James, and Priscilla Renea – to rewrite the lyrics for Sunday Night Football. The result, “Oh, Sunday Night,” was produced by Mark Bright and Chris DeStefano.

SNF IS TV’S NO. 1 PRIMETIME PROGRAM FOR 5 YEARS RUNNING: For the historic fifth consecutive Sept.-May television season, NBC’s Sunday Night Football finished astelevision’s No. 1 primetime show in household rating (13.0) and viewership (22.5 million average), as well as the coveted Adult 18-49 demographic (8.0), based on live plus same day data from The Nielsen Company (September-May). Sunday Night Football is one of only four shows since 1950 to rank No. 1 in primetime for five consecutive TV seasons.