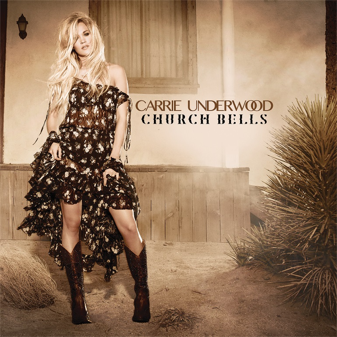 Produced by Mark Bright and written by Zach Crowell, Brett James, and Hillary Lindsey, “Church Bells” was singled out by Entertainment Weekly as a “twangy roof-raiser.” In fact, Underwood virtually brought the house down when she performed the prime-time television debut of “Church Bells” at the 51st Annual ACM Awards on CBS in April which drew a standing ovation from the audience at the MGM Grand Garden Arena. “Nothing short of spectacular” is how Rolling Stone Country recapped the ACM Awards moment.

The music video for “Church Bells,” directed by Wayne Isham and filmed during a live concert at Pinnacle Bank Arena in Lincoln, Nebraska, is currently #1 on GAC’s fan-voted Top 20 Country Countdown. The goal of director Isham, whose director credits include Michael Jackson, Bon Jovi, Metallica and Britney Spears, was to capture the country star’s energetic live performance and fans’ reactions and edit it into a 3:40 snapshot of a Carrie Underwood The Storyteller Tour – Stories In The Round experience. Watch the video here: http://smarturl.it/cuchurchbellsvevo.

Underwood begins the second leg of The Storyteller Tour on August 31st in Anchorage, Alaska.

Look for Carrie Underwood to kick off the 2016 season of football and a brand new theme song for “Sunday Night Football” on September 11th on NBC prior to the New England Patriots and Arizona Cardinals game. Titled “Oh, Sunday Night,” the new song is based on Underwood’s 2014 hit collaboration with Miranda Lambert, “Somethin’ Bad.”