The Only Country Artist and One of Only Six All-Genre Artists to Release a Platinum Album
Since December of 2014!

Nashville, TN – Superstar Carrie Underwood adds more precious metal to her tally of RIAA certifications with news that her Greatest Hits: Decade #1 has been certified Platinum.  The accomplishment makes Underwood the only country artist – and one of only six all-genre artists – to release an album to Platinum success since the release of Greatest Hits: Decade #1 in December of 2014. 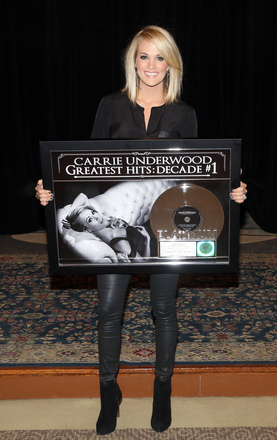 The 25-song collection spotlight the success of Underwood’s first 10 years of music-making and introduced two new #1 songs: the GRAMMY®-winning “Something in the Water,” as well as “Little Toy Guns,” the song that earned Underwood her current GRAMMY nomination for Best Country Solo Performance.

“Little Toy Guns” has since been RIAA certified Gold, while “Something in the Water” – a seven-week #1 smash on theBillboard Hot Country Songs chart – is now RIAA Platinum.

Upon release, Underwood’s Greatest Hits: Decade #1 debuted at #1 on Billboard’s Top Country Albums chart with first-week sales of 94,000 according to Nielsen Music, becoming the best-selling debut for a hits collection by an artist in any genre of music in more than six years.  The album would go on to become the best-selling hits collection of 2015, according to Billboard.

Not since November of 2005, when Underwood emerged on the scene with her now-7x-Platinum debut album, Some Hearts, had any female artist debuted with as high an opening-week sales tally for a hits package.

Underwood is currently in rehearsals for the January 30 launch of her new arena headline tour, The Storyteller Tour –Stories in the Round.

Underwood is climbing the charts now with “Heartbeat,” the beautiful new single from her Gold-certified, chart-toppingStoryteller album, which also includes her recent #1 smash, “Smoke Break.”