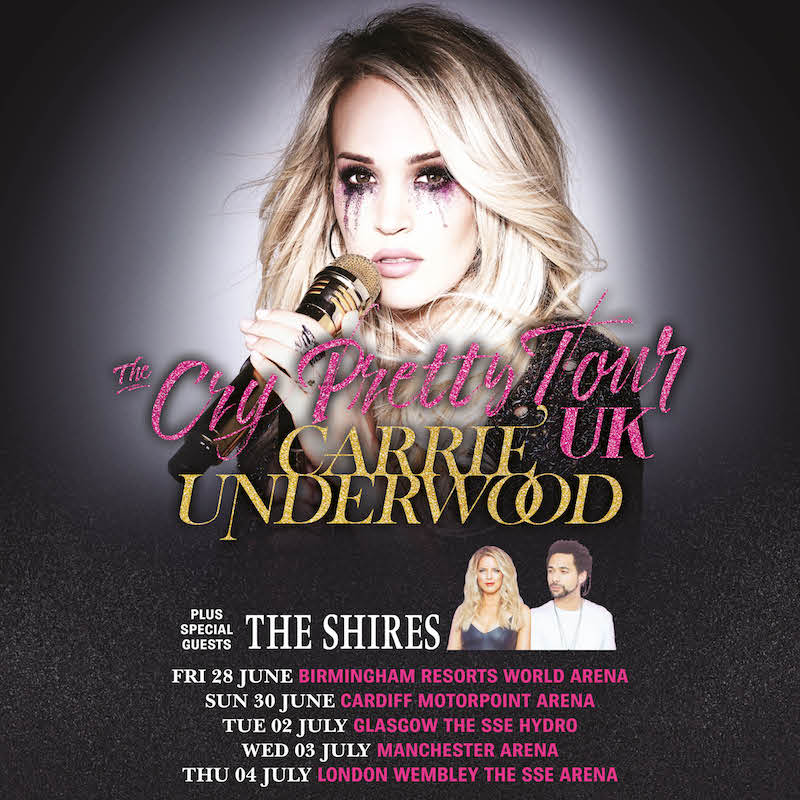 Multi-platinum superstar and seven-time GRAMMY® Award winner Carrie Underwood has announced a major UK arena tour for Summer 2019, The Cry Pretty Tour UK. Underwood made the announcement this morning in a personal video to her fans:

She will be joined on the UK tour by special guests, The Shires, the UK’s best-selling country act of all time.

Underwood has made numerous visits to the UK over the course of her career. She helped establish UK and Ireland’s Country To Country Festival, the biggest celebration of country music outside North America, with headline performances during its first year in 2013, and again during its fourth year in 2016, which included a sold-out show at London’s O2 Arena. Underwood’s first UK concert performance included a sold-out night at London’s prestigious Royal Albert Hall in 2012.

Tickets for the UK shows will go on sale Thursday, March 7 via www.gigsandtours.com and www.ticketmaster.co.uk. As she has done for her North American shows, Underwood has arranged for a donation from each ticket sold for The Cry Pretty Tour UK to be contributed to Danita’s Children, which provides a safe haven for abandoned and vulnerable children in Haiti, while encouraging families to stay together through their education and malnutrition programs.

Also beginning Thursday, March 7, a limited number of exclusive VIP Packages will be available at www.sjm-vip.com which include an amazing selection of tickets, Meet & Greet, autographed memorabilia, and custom merchandise.

The biggest selling UK country act of all time, The Shires will join Underwood on her UK arena tour this Summer. The duo released their debut album Brave in March 2015, which became the first British country album ever to enter the UK top ten. Ben Earle and Crissie Rhodes have been going from strength-to-strength ever since, and released their highly anticipated third album Accidentally on Purpose earlier last year.