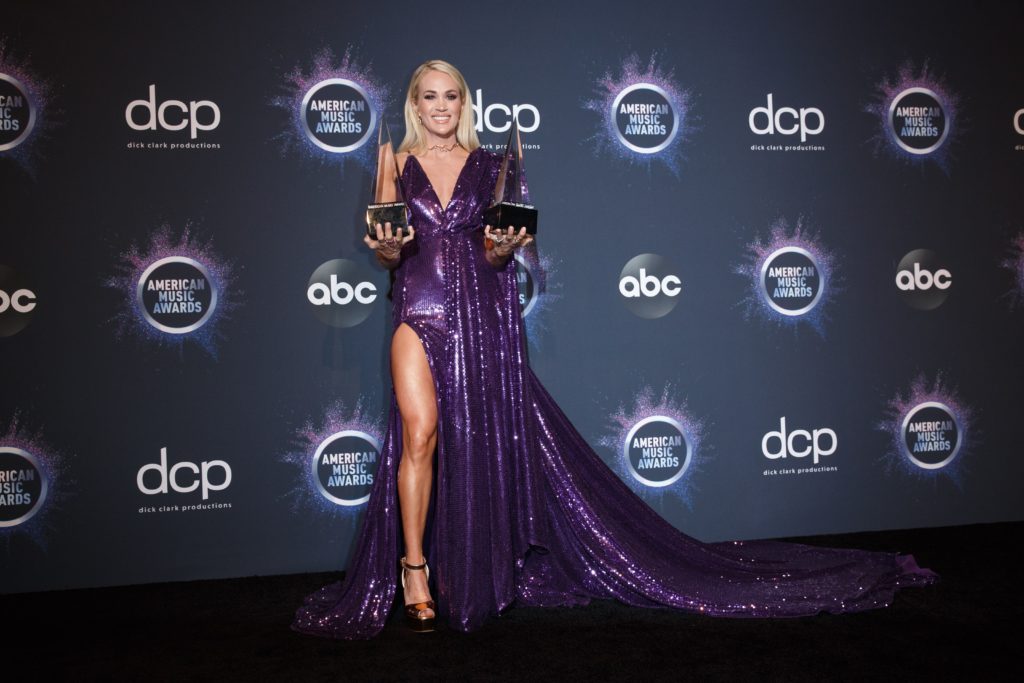 (November 25, 2019) – Superstar Carrie Underwood broke the record for most wins for Favorite Country Album with her 6th win in the category on the “2019 American Music Awards,” broadcast live on ABC from the Microsoft Theatre in Los Angeles on Sunday, November 24.  Underwood was recognized by fans this year for her critically acclaimed album, Cry Pretty, giving her the most wins in the category and making her the only artist in the history of the AMAs to win Favorite Country Album for all six of her studio album releases (Some Hearts, Carnival Ride, Play On, Blown Away, Storyteller, and now, Cry Pretty).  Other nominees in the category this year included Dan + Shay’s Dan + Shay and Kane Brown’s Experiment.

Underwood also won her 7th award as Favorite Female Artist – Country.  With previous wins for Favorite New Breakthrough Artist in 2006 and the T-Mobile Text-In Award for Artist of the Year in 2007, this year’s ceremony brings Underwood to 15 career total American Music Awards, tied with Reba McEntire as the most awarded female country artists in AMA history, and ranking her among the top 10 all-time winners in all categories, across all genres.

The American Music Awards is the world’s largest fan-voted award show, paying tribute to today’s most influential and iconic artists.  The show is produced by dick clark productions and is seen in more than 200 countries and territories around the world.  Nominations are based on key fan interactions as reflected on Billboard.com, including streaming, album and digital song sales, radio airplay, social activity and touring. These measurements are tracked by Billboard and its data partners, including Nielsen Music and Next Big Sound, and reflect the time period of September 28, 2018 through September 26, 2019.

Underwood recently completed her stellar The Cry Pretty Tour 360, closing out the tour in the #1 spot on Pollstar’s LIVE75 chart (11/04/19), which ranks worldwide active tours by average tickets sold.  On November 13, she hosted ABC’s CMA Awards for the 12th consecutive year.  She was joined this year by special guest hosts Reba McEntire and Dolly Parton for the three-hour live telecast, which dominated the night, ranking #1 in all 6 half-hours of primetime, as well as the becoming the #1 most social entertainment program across broadcast and cable for the night, with 2.4M total social interactions across all platforms, marking a 104% increase over the 2018 telecast, as measured by Nielsen Social.