HEARTFELT FAN PERFORMANCES OF “THE CHAMPION” 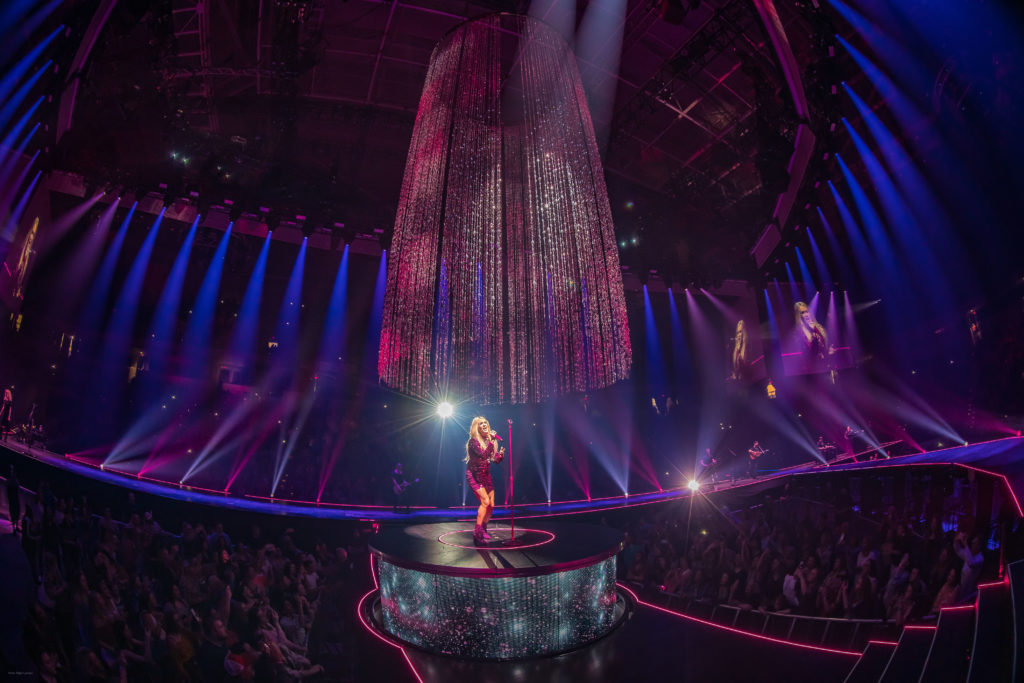 The tour began May 1 in Greensboro, NC and concluded October 31 in Detroit, MI, packing arenas in 60+ cities across North America. Numerous 360-degree sold-out shows included New York’s Madison Square Garden, Nashville’s Bridgestone Arena and L.A.’s STAPLES Center, among many others. Underwood was joined by special guests Maddie & Tae and Runaway June throughout the tour, which was sponsored by CALIA.

THE CRY PRETTY TOUR 360 consistently garnered both critical and fan acclaim for its innovative production and eye-shaped stage design in the middle of the arena floor to create an intimate view for all attendees and for Underwood’s standout vocal performances. Critics have been uninamous in their praise of Carrie and THE CRY PRETTY TOUR 360:

“While much discussion about a woman’s place in country music is happening, Underwood is walking instead of talking. Taking two young female acts on the road, she delivered an arena show that goes toe-to-toe with anyone in any genre, not just country, as a vocalist, as a show(wo)man, as the embodiment or
realization of what the audience aspires to. And she does it in 5-inch heels.” (Pollstar)

“An artist that both entertains and inspires, Underwood’s Cry Pretty Tour 360 cements her entertainer of the year status” (Billboard)

“The 360 production is second to none. – Underwood’s 360 stage is a work of art, as it
features an incredible hydraulic system that lifts up nearly half the stage… You could almost say you’re getting a show and a movie, all in one night.” (Rolling Stone) 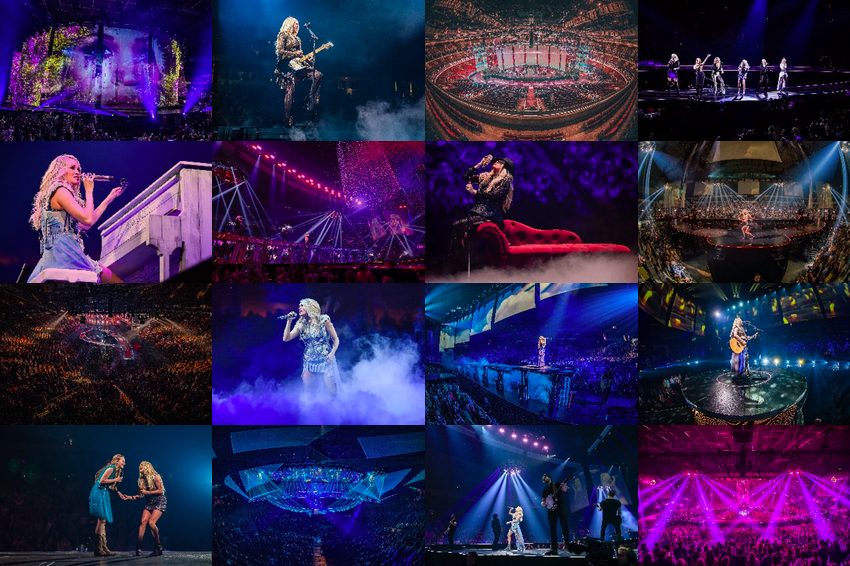 The spectacular, one-of-a-kind production utilized 36 projectors and 19 video projection screens, with 15 stage elevators and over 400 moving lights. Throughout the set, Underwood could be seen playing acoustic and electric guitar, piano and percussion at various times with her talented 8-piece band, who played 22 different types of instruments, 45 in total.

During one of the many memorable moments of her two-hour show, Underwood invited CMA nominees Maddie & Tae and ACM-nominated Runaway June to return to the stage to join her for a crowd-pleasing 10-song medley of hits by some of the many women that she cites as having paved the way for her and all of today’s female artists in the genre, featuring Tammy Wynette, Patsy Cline, Loretta Lynn, Dolly Parton, The Judds, Trisha Yearwood, Faith Hill, Reba McEntire, Martina McBride and Shania Twain.

Another standout moment of each show featured the winner of an ongoing contest, wherein fans submitted inspirational personal stories about what Underwood’s hit anthem, “The Champion,” means to them for the chance to join her on stage and perform the rap originated by Ludacris on the Platinum track. In one of her final shows in her home state of Oklahoma, Underwood was joined onstage by her mother, Carole, who she described as her own personal “champion.” Link to Carrie & Carole Underwood Video HERE and Link to “The Champion” Tour Highlights HERE.

Furthermore, Underwood arranged for a donation of $1 from each ticket sold for THE CRY PRETTY TOUR 360 to be contributed to Danita’s Children, which provides a safe haven for abandoned and vulnerable children in Haiti, while encouraging families to stay together through their education and malnutrition programs.

In June, Underwood performed her UK arena tour, THE CRY PRETTY TOUR UK, which brought her dynamic production and signature vocal prowess to thousands of fans throughout England, Wales and Scotland with five arena shows. One of the standout moments of the tour was Underwood’s milestone performance at Glastonbury Festival’s iconic Pyramid Stage and was seen around the world online. Fans traveled from numerous countries across the globe – USA, Spain, Canada, Germany, Belgium, France, Netherlands, Finland, Israel, Slovenia, Norway, Sweden and Australia, among others – to be in attendance at the shows. THE CRY PRETTY TOUR UK also featured the UK’s best-selling country act of all time, The Shires, as Underwood’s special guest.

Amidst her busy touring schedule, Underwood headlined CMA Fest 2019, where she was joined on stage by Joan Jett for a showstopping medley of Jett’s greatest hits. She performed her #1 Summer hit, “Southbound” on the ACM Awards and on the finale of “American Idol,” as well as the 2019 CMT Music Awards, where she won her 19th and 20th awards, becoming the most-awarded artist in the show’s history. As a member of the Grand Ole Opry, she has performed ten shows this year in addition to inducting new Opry member, Kelsea Ballerini. Underwood returned for her seventh season as the voice of NBC’s Sunday Night Football, primetime television’s #1 program for the past eight consecutive years, making it the most dominant primetime show since 1950. She recently performed live from her tour stop in Cleveland as one of CMT’s “2019 Artists of the Year” and has been nominated for the People’s Choice Award for Favorite Country Artist, and has earned two American Music Awards nominations this year for Favorite Female Country Artist and Favorite Country Album for Cry Pretty. Her latest single from this album, “Drinking Alone,” has just been released to country radio.

On November 13, Underwood will host the CMA Awards for the 12th consecutive year and has been nominated for three awards this year, including Entertainer of the Year, Album of the Year for Cry Pretty, and Female Vocalist of the Year. In 2020, she will once again headline the Stagecoach Festival and HarperCollins/Dey Street Books will publish her first book, FIND YOUR PATH: Honor Your Body, Fuel Your Soul, and Get Strong with the Fit52 Life, a fitness lifestyle book in which she shares her belief that fitness is a lifelong journey and not about perfection. She is celebrating her 4th anniversary as lead designer for her fitness and lifestyle brand, CALIA by Carrie Underwood, which launched in 2015 and is exclusively available at DICK’S Sporting Goods nationwide and online at www.caliastudio.com.