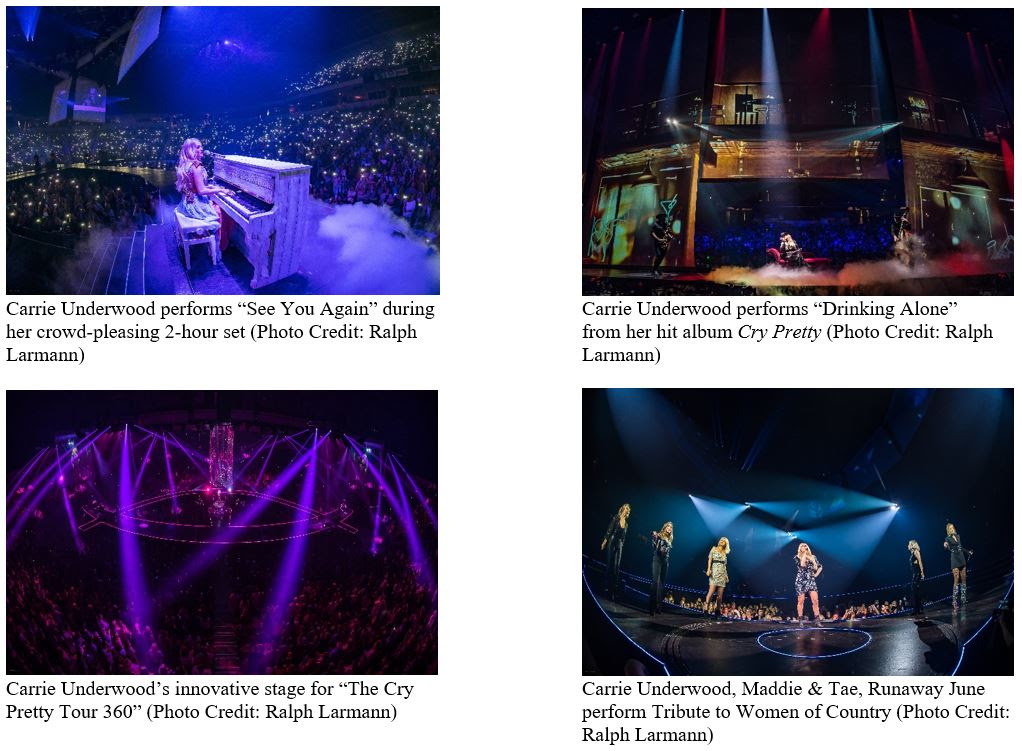 Following her sold-out opening night at Greensboro, NC’s Greensboro Coliseum, seven-time Grammy Award-winning superstar Carrie Underwood, continues her spectacular new arena tour, THE CRY PRETTY TOUR 360, with sold-out shows at Legacy Arena at BJCC in Birmingham, AL and Verizon Arena in Little Rock, AR.  Sponsored by CALIA, the new tour will play 55+ arenas across the U.S. and Canada and is promoted by AEG Presents.  A strong supporter of rising female artists, Underwood is joined on THE CRY PRETTY TOUR 360 by special guests Maddie & Tae and Runaway June, who also joined her onstage for a tribute to numerous female country icons, in addition to their own crowd-pleasing sets.

Underwood’s dynamic two-hour set kept fans on their feet, featuring songs from her critically-acclaimed album, Cry Pretty, including the title track, her recent hit single, Love Wins, and the just-released Southbound, which had its broadcast debut on the recent ACM Awards and was the most-added single at country radio last week.  Another highlight of the show featured the winner of an ongoing contest wherein fans submit stories about what Underwood’s hit anthem, The Champion, means to them for the chance to join her on stage and perform the rap originated by Ludacris on the platinum track.

The show’s production features an innovative stage in the middle of the arena floor, creating a unique 360-degree setting to allow fans on all sides of the arena an intimate view of the concert.   The show utilizes 36 projectors and 19 video projection screens, with 15 stage elevators and over 400 moving lights.  Throughout the set, Underwood can be seen playing acoustic and electric guitar, piano and percussion at various times with her talented 8-piece band, who play 22 different types of instruments, 45 in total.