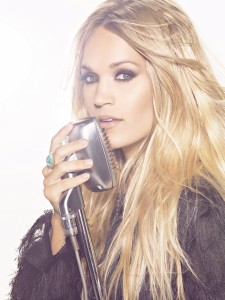 Anchorage, AK (May 16, 2016) – Seven-time Grammy winner Carrie Underwood’s Storyteller Tour has added a stop in Anchorage, AK at Alaska Airlines Center on August 31, 2016. This will be Underwood’s first trip to Alaska. The tour launched to rave reviews in January and has already played sold out shows across the U.S. and Europe, including a crowd of over 17,000 at Boston’s TD Garden.

“I always love being on the road performing for my fans,” shares Underwood, “but something about this tour feels more magnetic than ever. I can’t wait to continue this tour into the fall!”

The Alaska show is promoted by Invictus Entertainment Group.  For information on fan club and D2C pre-sale opportunities and VIP packages go to www.carrieunderwood.fm.

A donation of $1 from each ticket sold at the U.S. dates of The Storyteller Tour will be contributed to the C.A.T.S Foundation to help aid its causes including Checotah, Oklahoma’s education and literacy programs. Established in 2009, the C.A.T.S. (Checotah Animal, Town, and School) Foundation helps with general causes, needs, and services in the area of Checotah, Oklahoma, Carrie’s hometown, to directly impact the community.

** Anchorage goes on sale May 20th

The tour is in promotion of Carrie’s album, Storyteller, which was heralded by Rolling Stone as “the most anticipated country album of the year.” The album was produced by Jay Joyce, Mark Bright, and Zach Crowell with six of its 13 songs co-written by Carrie, including the #1 hits “Smoke Break” and “Heartbeat.”